Last year the BBC spent 9 months filming behind the scenes at a cosmetic surgery clinic in Glasgow. BBC One Scotland recently aired this as a one hour documentary titled ‘Facelifts and Fillers’. The program aims to show the world how aesthetic medicine is now a part of mainstream life for ordinary people, dispelling some of the myths that are often portrayed by the media. Patients were shown coming to the clinic to have everything from face and eye lift surgery to hair transplants and filler injections.

Our lead consultant plastic surgeon, Amir Nakhdjevani, has regularly practised from Darren McKeown’s clinic performing many of the most popular cosmetic procedures such as Facelifts, Neck lifts and eyelid surgery. As a pioneering consultant cosmetic surgeon, specialising in facial rejuvenation, Amir was invited by the BBC and Dr Darren McKeown to perform his very own, industry leading Concept™ Facelift procedure.

The programme gives a fantastic insight into many non-surgical and surgical procedures that are also offered here at Bella Vou, Amir’s own clinic in Royal Tunbridge Wells, including; botox®, Fillers, Hair Transplants, Obagi Peels and the Concept™ Facelift.

Amir Nakhdjevani pioneered the Concept™ Facelift technique, but can also offer dermal filler injections, a much less invasive treatment to help iron out skin wrinkles and give a fresh, younger appearance.

The BBC aired the documentary across the UK on BBC One, on Tuesday 29th March 2016 in a one hour documentary titled ‘Facelifts and Fillers’.

You can watch the entire episode right here! 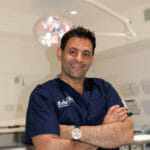 Throughout his plastic surgery training, Amir has dedicated his time to learn advanced techniques in plastic and cosmetic surgery and believes that plastic, reconstructive and aesthetic procedures have to be tailored to an individuals needs to meet their expectations.

Amir has continued to publish in peer review journals throughout his medical career as well as having a textbook to his name. He has presented extensively at national and international plastic surgery meetings.